Please Join Us in Celebrating “Zweig at Fredonia: 50 Years of Transformation”

Posted on September 6, 2017 by zweigatfredonia

As part of the 2017-2018 Convocation Series at Fredonia, “Transformations”, please join the Archives & Special Collections of Reed Library and the Department of English in celebrating the 50th anniversary of the Stefan Zweig Collection at Reed Library, as well as marking 75 years since the death of the archives’ namesake, the Austrian author Stefan Zweig (1881-1942). The acknowledgment of these momentous dates will include three separate events in October and November 2017, all of which lend variant meanings to the theme of transformation by focusing on questions of exile, race, national identity/nationalism, and loss of cultural heritage as seen through the perspective of a Zweig scholar, a documentary filmmaker, and the archival documents that comprise the Stefan Zweig Collection.

All events are free and open to the public and will be held on the campus of The State University of New York at Fredonia in Fredonia, NY, USA. For directions and lodging information, please visit the Fredonia website.

The first event will be an opening reception for the exhibit, Zweig at Fredonia: 50 Years of Transformation. Drawing upon correspondence and other archival documents found in both the Stefan Zweig Collection and the Robert Rie Papers, the exhibit will, in part, trace the relationship between Zweig and Dr. Robert Rie, former Professor of German at Fredonia, without whose initial vision and actions Fredonia would not possess the Zweig archive it presently holds. Rie, like Zweig, was an exile who emigrated from Austria to America in 1938 and who, also like Zweig, wrote on issues of race and nationalism. The exhibit will highlight documents from both the Zweig and Rie Collections related to such “transformative” events as the Holocaust, World War I, and the experiences of both men as exiles. However, the focus of the exhibit will be the evolution of the Zweig archive at Fredonia from the earliest accession in 1967 of correspondence between Zweig and his first wife Friderike to later acquisitions from surviving heirs, comprising the bulk of the collection: over 6000 items of correspondence written to Zweig alongside manuscript drafts of many of his works, personal documents, photographs and other materials. 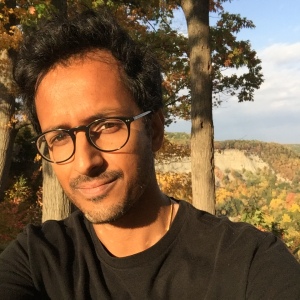 Dr. Manthripragada’s lecture will focus on Zweig’s little-known writings on race in America  as well as his hitherto largely unknown interactions with black leaders during a 1930s lecture tour in the American South. For his groundbreaking study, Dr. Manthripragada draws in part on key transformative archival documents, including those discovered during a research visit to Fredonia’s Archives & Special Collections in the summer of 2016. The lecture will take place in the Science Center on the campus of Fredonia immediately following the exhibit opening reception.

Read more of Dr. Manthripragada’s scholarship on Zweig, “Stefan Zweig’s Fear of Postcolonialism“, which addresses Zweig’s struggle with the “end of Empire” (TRANSIT, vol. 11, no. 1).

The final event will be the screening of the recent documentary The Destruction of Memory and a post-screening panel discussion with the film’s director, Tim Slade.

Trailer for The Destruction of Memory © Vast Productions USA

Based on Robert Bevan’s book of the same name (The Destruction of Memory: Architecture at War), the film documents the erasure in this past century of cultural touchstones worldwide, and by default the collective memory of nations and society as a whole, whether through the vehicle of war or other premeditated acts of violence and destruction. It highlights various locations in the Middle East (Palmyra, Syria and the Iraqi National Museum); Banja Luka, Bosnia and Herzegovina (whose mosques were destroyed during the Bosnian War); and, most pertinent to Zweig’s time, Dresden, Germany and the devastating effects of the World War II bombings. Though at times geographically and temporally disparate from the world Zweig occupied, the themes of the film, nonetheless, resonate with Zweig’s own personal loss of culture, particularly in the attention paid to the effects of war on European Jewish patrimony.

Read an interview with Tim Slade about the making of the film on the Studio International website.

The Zweig at Fredonia: 50 Years of Transformation commemorative events are part of Fredonia’s 2017-2018 Convocation Series which is sponsored by the President’s Office. Additional support is provided by The English Department’s Mary Louise White Fund, and the Carnahan-Jackson/Reed Library Endowment Fund.

The views and opinions expressed in this page are strictly those of the page author(s).  The contents of this page have not been reviewed or approved by The State University of New York at Fredonia.