Please join the Archives & Special Collections of Reed Library, the Department of English and the School of Music at The State University of New York at Fredonia in a celebration of Stefan Zweig and music at the upcoming Zweig at Fredonia 2016 schedule of events to be held October 3-5, 2016 on the campus of Fredonia in Fredonia, NY: “Zweig and Strauss: Artistic Collaboration in a Time of War”.

Highlighting Zweig’s lifelong fascination with music, this three-day event will commence October 3 on Fredonia’s campus with a panel discussion investigating the collaborative relationship between Zweig and German composer Richard Strauss. The panel will be led by noted historical musicologist and Zweig scholar Dr. Matthew Werley.  Currently a Research Fellow at the renowned Richard-Strauss-Institut in Garmisch-Partenkirchen, Germany, Dr. Werley is co-editing, together with Dr. Jeffrey B. Berlin, a forthcoming critical edition of newly translated correspondence between Strauss and Zweig.

A post-panel reception at Fredonia’s Reed Library on the evening of October 3 will open an exhibition featuring select items from Fredonia’s renowned Stefan Zweig Collection illustrating Zweig’s personal connections to contemporary composers (Strauss, Bruno Walter, Arturo Toscanini, among others) in both creative and intellectual terms. The exhibit will also attempt to portray Zweig’s position in relation to the increasingly hostile environment of Nazi Germany within which artistic and musical expression struggled to survive, including a somewhat cryptic telegram sent from Strauss to Zweig on the 1935 premiere in Dresden of Strauss’ opera Die schweigsame Frau (The Silent Woman) for which Zweig himself famously wrote the libretto.

On the evening of October 4, Fredonia School of Music faculty and students will perform excerpts from Die schweigsame Frau, which Strauss composed during his tenure as head of the Reichsmusikkammer under the Nazi regime. Strauss’ decision to commission Zweig as his librettist for the opera would ultimately harbinger his resignation from the post under acute Nazi pressure. 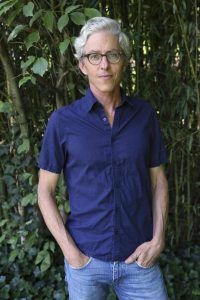 Finally, on October 5, Fredonia welcomes the return of renowned author and Zweig biographer George Prochnik (The Impossible Exile, Other Press, 2014) as he delivers the keynote 4th Biennial Stefan Zweig Lecture in Fredonia’s Rosch Recital Hall. Prochnik previously participated in the 2009 Zweig Symposium at Fredonia where he presented his paper “The Netherworld of Yesterday: An Imaginary Conversation between Stefan Zweig and Hannah Arendt” (listen to the podcast here). A brief conversation between Prochnik and Paul Holdengräber at the New York Public Library can be viewed here.

From the Zweig Collection at Fredonia

Letter from Stefan Zweig to Richard Strauss (13 December 1934) in which he expresses his concerns about a German premiere of Die schweigsame Frau. 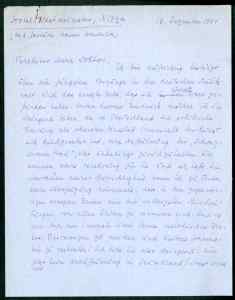 The views and opinions expressed in this page are strictly those of the page author(s).  The contents of this page have not been reviewed or approved by The State University of New York at Fredonia.