Posted on February 21, 2016 by zweigatfredonia 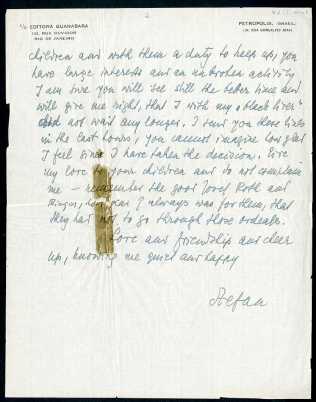 Welcome to the inaugural post for the Stefan Zweig Collection at Fredonia. Launched on the eve of the 74th anniversary of Zweig’s death, the purpose of this blog is to encourage the scholarship and appreciation of Stefan Zweig by highlighting certain materials from the Zweig Collection at Fredonia, promoting other manuscript collections of Zweig materials around the world, and informing readers about Zweig-related conferences, symposia, exhibits and other events, both on the campus of Fredonia and at institutions worldwide.

The above image from the Stefan Zweig Collection at Fredonia (Stefan and Friderike Zweig Correspondence, Box 23, folder “1942”) is the last known letter from Zweig to his first wife, Friderike, with whom he continued to correspond many years after their divorce. One of thousands of manuscript materials belonging to the Zweig Collection at Fredonia, the letter was composed in English (to avoid war-time censorship) from Zweig’s home in Petrópolis, Brazil one day before he was found dead alongside the body of his then spouse, Lotte, in a double-suicide. In this letter Zweig articulates the great sense of despair caused by exile from his native Austria and the loss of so many loved ones on the European continent as a result of the war: “ … I suffered so much that I could not concentrate any more … I send you these lines in the last hours, you cannot imagine how glad I feel since I have taken the decision.”

Zweig and Lotte would be discovered on 23 February 1942 by their housemaid who became concerned when the couple had not emerged from their bedroom by the middle of the afternoon.¹ A suicide note, Declaração, penned by Zweig on 22 February 1942, is housed at the National Library of Israel as part of the NLI’s Stefan Zweig Collection.

Though lacking English subtitles, a documentary produced by TV Brazil, Paraíso Utópico, provides a visually engaging and respectful illustration of Zweig’s short-lived, though ultimately profound, effect on and relationship to the country of Brazil and offers a glimpse into the world that comprised Zweig’s final months. The film takes inspiration from Zweig’s Brasilien, ein Land der Zukunft (1941) and includes multiple segments with noted Brazilian journalist Alberto Dines, author of Morte no paraíso (1981), a biography of Zweig (which later served as motivation for the 2002 film Lost Zweig directed by Sylvio Back). Dines also participated in the first Stefan Zweig Symposium held on the campus of Fredonia in 1981. Even viewers lacking in Portuguese language skills will be able to appreciate the reverence with which Zweig, to this day, is regarded by the intelligentsia of Brazilian society, as well as have the opportunity to view fascinating images of Zweig and his wife, Lotte, both while they were alive and, somewhat grotesquely, on their mutual death bed.

A briefer cinematic tribute to Zweig, Casa Stefan Zweig, also features Dines and provides an historical account of the house originally occupied by Zweig and his wife in Petrópolis until their deaths. Casa Stefan Zweig is now a museum devoted to Zweig’s memory and that of countless other exiles who made their homes in Brazil and left substantial marks on its culture and society. This short film is overdubbed in English.

The views and opinions expressed in this page are strictly those of the page author(s).  The contents of this page have not been reviewed or approved by the State University of New York at Fredonia.